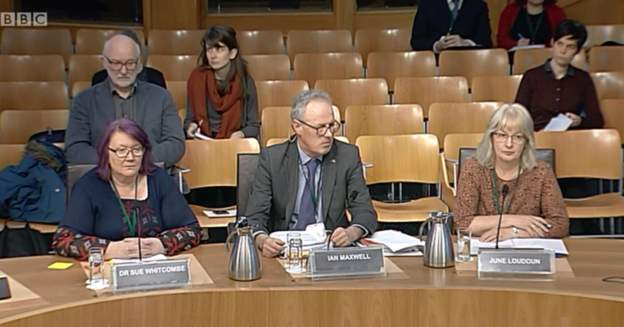 Chartered psychologist Dr Sue Whitcombe, Ian Maxwell from Shared Parenting Scotland and June Loudoun from Grandparents Apart UK gave evidence on Tuesday 14th January to the Scottish Parliament Justice as part of their Stage 1 consideration of the Children (Scotland) Bill.  The session can be viewed on Parliament TV and was also covered on the BBC.

A transcript of the session is now available at this link.

Committee questions ranged across the various aspects of the Bill including children’s participation in decisions about them, parental alienation, how should children’s views be obtained, parental rights and enforcement of contact orders.

In his evidence, Ian Maxwell stressed that by no means all Section 11 cases are about domestic abuse.  The Bill documentation mentions the estimate that 50% involve allegations of abuse. As the Faculty of Advocates states in their submission, “This can range from serious assault and coercive control to those in which have little or no foundation but cause prejudice to an opponent.”   He stated that many of the people who are in these court hearings are worthy parents and their children deserve to see them, not be protected from them.

Responding to a question from Fulton Macgregor MSP, he stated that the mention of Contact and Residence orders in the law is inaccurate and misleading.  Parents who get a residence order mistakenly think that puts them in charge.  Such terms have been removed in many other countries, in England in 2014 and in Canada in 2019.

He explained that we are supporting a rebuttable presumption of shared care because it provides a clear starting point for the sheriff in considering arrangements for a child.  At present the starting point is usually set very low – anything from a weekly hour in a contact centre to every 2nd weekend.  Judges in Belgium say that their law change gave them a much clearer starting point.  This does lead to more shared care decisions, but currently only in about 50% of court cases.

£2 pays for the tea and biscuits at a local group meeting. People hear from others going through similar issues at meetings and don't feel so alone. Everyone is welcome at the meetings, see the listings on this website. Donate £2 Donate £2

£10 pays for the time we spend to compile the answer to one of the Frequently Asked Questions on the new web site. FAQs are based on real enquiries in order to help others deal with similar issues. Donate £10 Donate £10

£50 pays for the cost of training a lay supporter to accompany someone to court if they don't have a lawyer. The supporter provides moral support, takes notes and helps people to know how the court works. Donate £50 Donate £50

£100 pays for us to publish a factsheet on a new topic, based on an issue that people are asking us about. Donate £100 Donate £100

If we have given you a lot of help and you can afford it, we are very grateful for larger donations. Donate £££ Donate £££